Our visit in Mummy Jees trust and school. 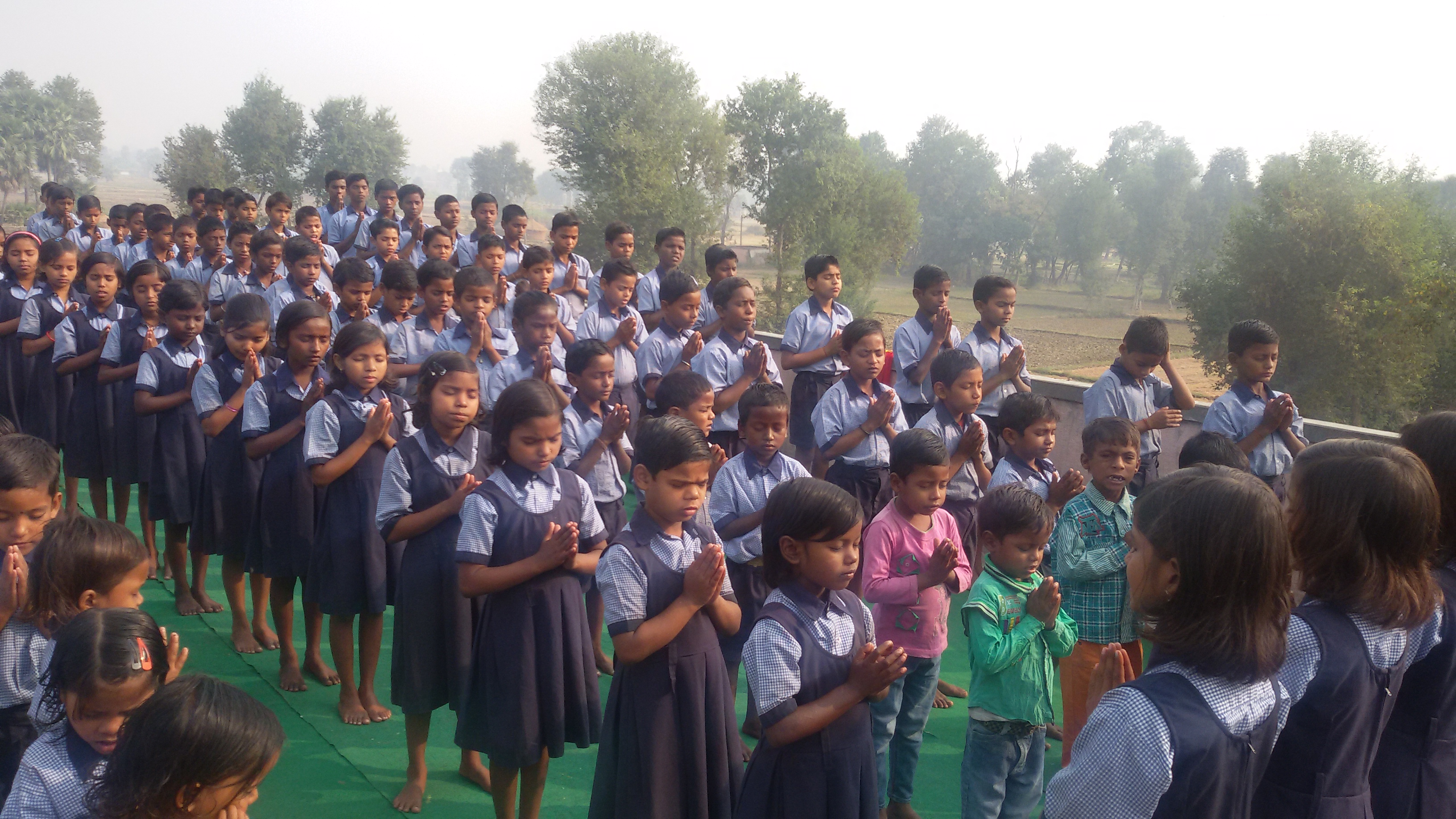 We arrived the day of new years evening at Gaya train station 06 in the morning, by the night train from Delhi.

We were picked up by Munna and Sang Po.

When we came to the school all the children stood in line, they were doing puja for us and we were given flower necklaces. We walked trough the line of children and they were showering us with leaves of flowers.

It was overwhelming to receive all this gratitude and love. All the children was smiling and calling our names.

They are doing most of their teaching on the rooftop, since they don’t have any room that will fit all the 200 children. So we entered that and experienced their morning teaching, singing, praying.

Everybody were so excited that they finally were to meet us, since they had heard about us for so long. 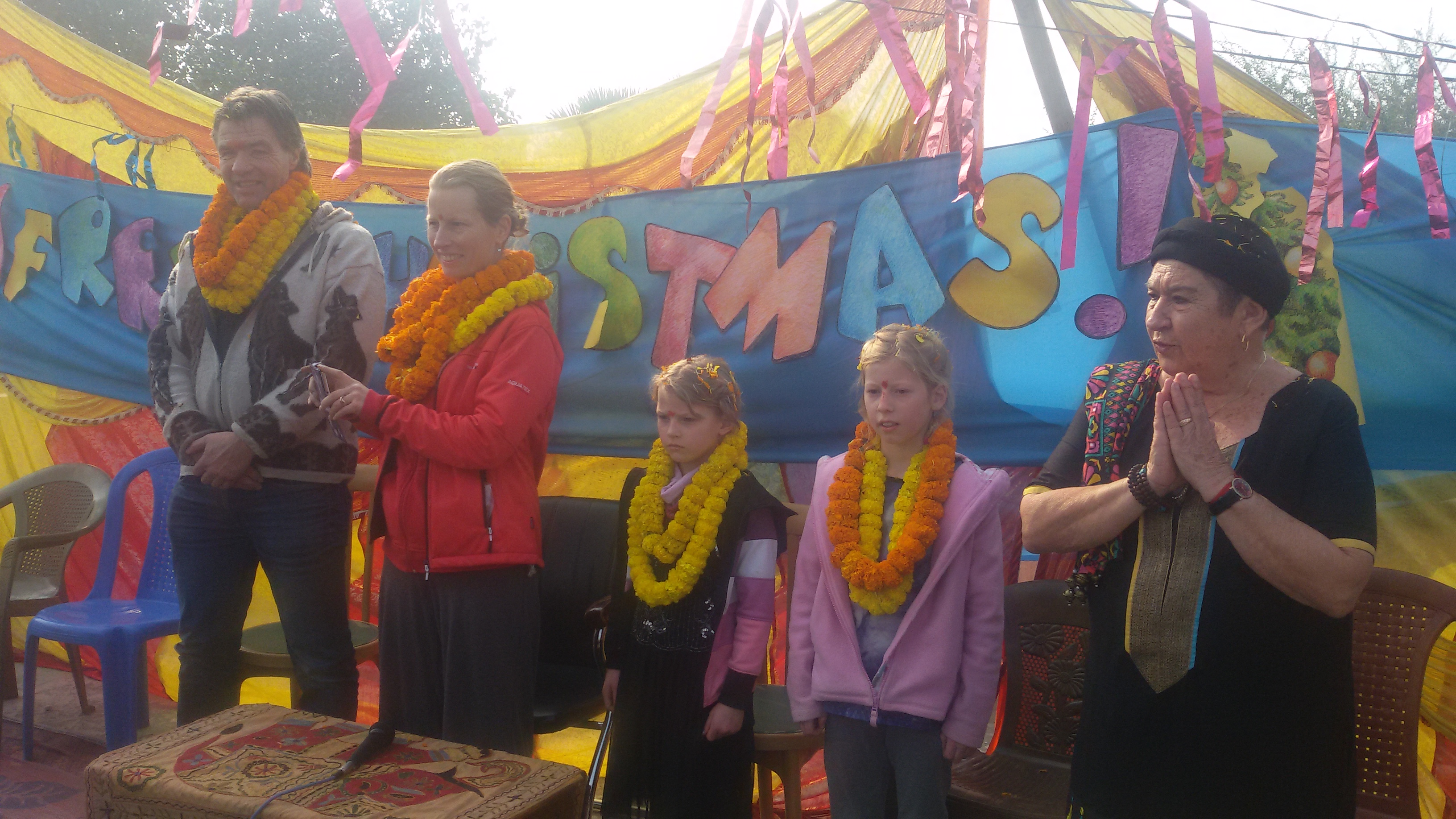 We had brought gifts for all the children from back home, so they were very excited. They all stood in line to receive a teddy bear, car or other things.

In the evening we were celebrating new year. They were having a big bonfire and lots of crackers and firework. They were playing music for all the people in the village where the school is placed. The sound was so loud and the sound system really bad quality. But everybody were happy, celebrating and dancing all night. When we went to bed we were listening to the noise all night.

We live at the school, they have provided two nice rooms for us. We feel like at home, as one big Family. 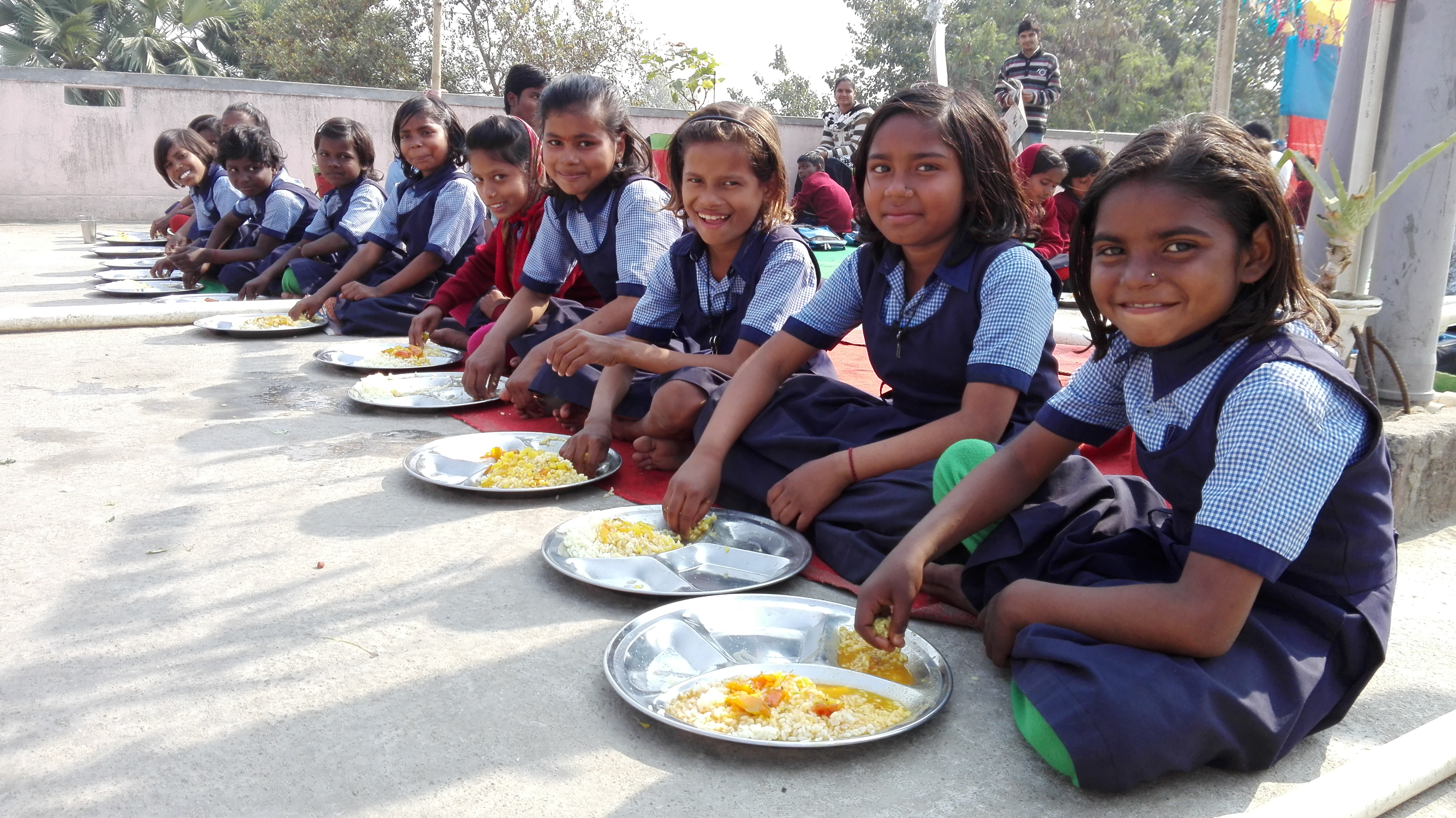 The trust is having a tough time, since for the moment we are their only sponsor. We have given them more than we had planed, and still it is far from enough. Our 2000 Euros are covering the salaries and food. They are finally paying the teachers, who haven’t been paid for two months. Everywhere they are having credit. So there were many depts to be paid. At the moment I’m sitting in their office, and at the same time they are giving out salaries. The salary is not much, and I wonder how they are able to manage on that low salary.

It is a big job to manage a school of 200 children, but the organization is good and all the systems are working. They have very good and dedicated teachers, good staff helping Mummy Jee and a very positive spirit.

Their main problem is how to find the money they need every month. Roughly they need 350 Euros each month, as a minimum, to cover all basic expenses. 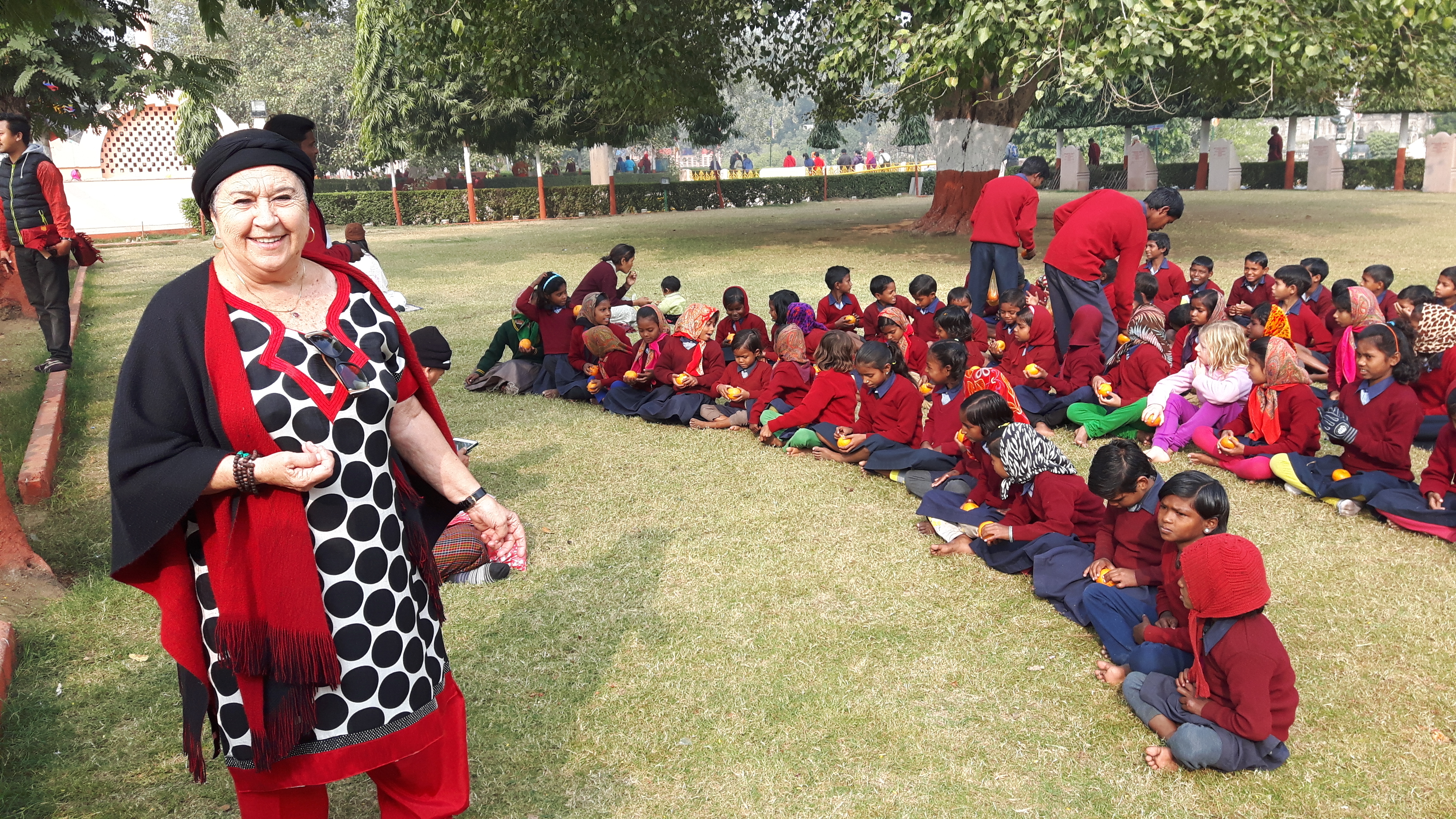 1th of January we invited all the children to a passing amusement park. We bought them candy floss and they tried a few different roller coasters. It was the first time they experienced something like that in their whole life.

Imagine to have all of these children together with us on the Tivoli. So much fin. The way they do it is very different. They even had a ship, where the movement was made by hand.

They have asked us to be part of the trust. So today we vent to Gaya, to see their layer. He had his office in a small garage, with little space.

We walked by lots of garbage, which they throw in the road. They also throw their left over’s here. So it attract all the animals. There were cows, dogs and chickens in the stress where we were suppose to walk.

We are very honored to be part of the trust. And they are very excited for us to get involved in this way.

The children are eating rice 3 times a day, for lunch it is with a little dall with potatoes and tomatoes, in the evening it is only rice and water.

But it is a lot of food that is needed. They have 3 very sweet women working in the small kitchen. Here they cook all the food on a firewood. They have no table, like we have, so all is made on the floor or on a small table, where they also sit.

We have been eating there most of the time, and the food they make are delicious. For us they make better food, that is not so spicy. So we have had egg and also chicken one time, but mostly hash brown potatoes as a supplement to the rice and dall. 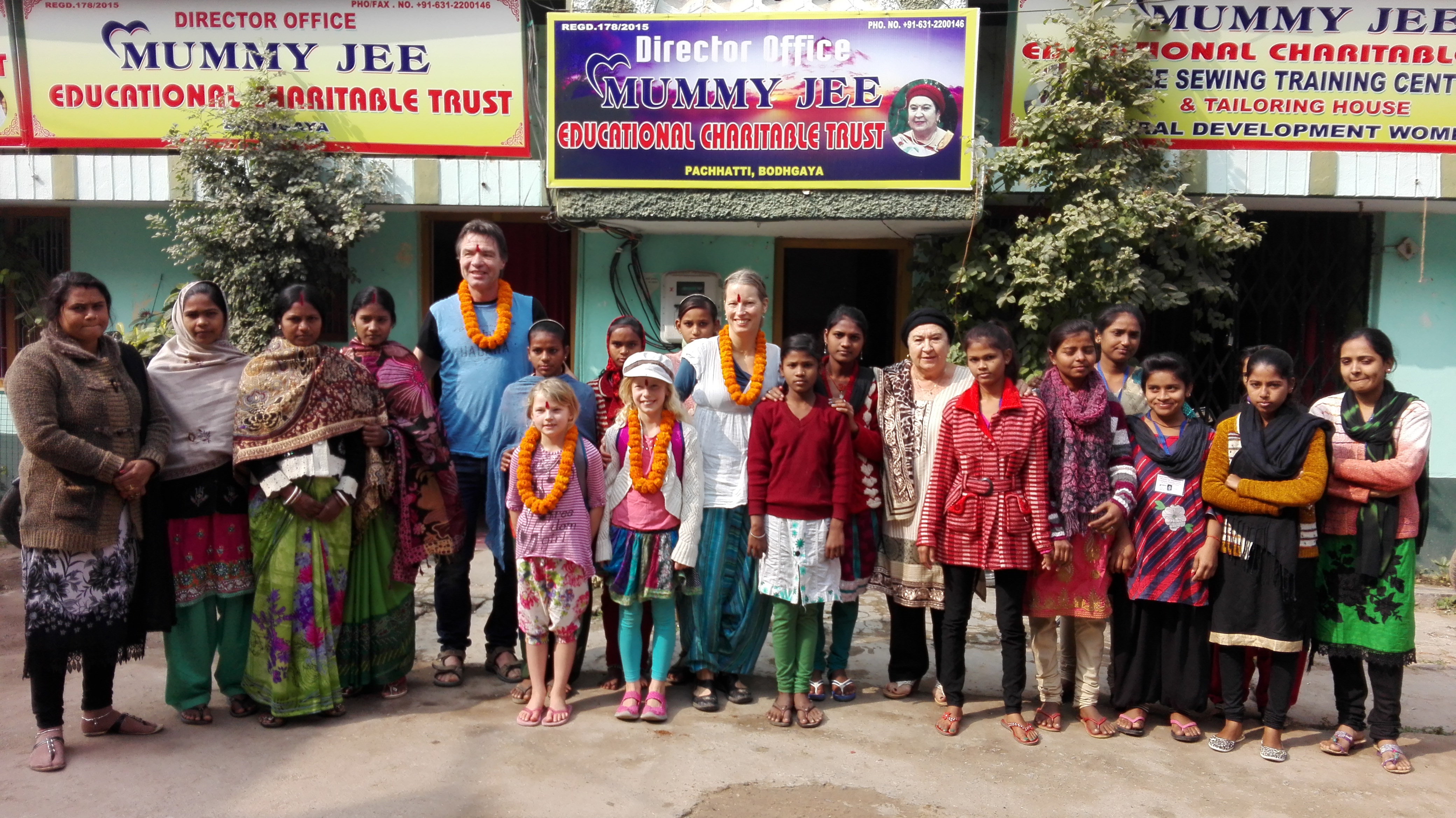 On Sunday all the children are at the temple, first they are praying and meditating, then they will have a small breakfast, toast bread and a fruit. Afterwards they are playing in the park. Sunday is the only day off.

In the school they have a good vararity of topics. They have all their basic subjects, like math, science, hindi, English. But also they have yoga, karate, dancing and singing. They have many subjects that we would need to make more hole and complete children.

The children who are part of the school would not have got a schooling if t=it was ot for the work the trust is doing. There is such a contrast from the other children we meet in the village, who looks like wild humans, sometimes more like an animal, than a human. Most of the children on the school also were like this before they entered the school.

Mummy jee, who is in charge of the school has got 7 awards for her great work she has been doing for the poor children of India.